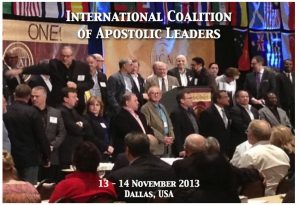 ICA has changed its name! Dr Kelly announced at the first meeting that the International Coaltion of Apostles will now be called the International Coalition of Apostolic Leaders. We believe that this is a strategic change as it opens the door for apostolic leaders in other spheres to be comfortable to be a part of the Coalition. Dr Kelly explained that there are many apostles who do not like to take the title of apostle and are uncomfortable with it. For this reason, they do not want to be a part of ICA. He then pointed out that if the real apostles do not take their places, false ones will. In order to avoid this, he decided to change the name so that leaders from all the walks of life would be able to identify and bring their influence to the Coalition.

Joseph Matterra did add that they would still apply a strict vetting process to all applications to ensure that all members are indeed apostles according to the biblical criteria.

Another change that was announced is the appointment of continental convening apostles. In the past 2 years, ICAL has seen tremendous growth in the nations. There are about 15 national coalitions that have been officially formed and a further 10 or 15 in the process of forming. The rapid growth has made it administratively very difficult for one person to oversee and thus continental conveners are being appointed. The model that is working very well at present is the European Coalition. Jan Aage Torp has been appointed to the position of continental convener and he is doing a great job of keeping the European apostles connected and up to date with each other. A spirit of unity has developed among these apostles and it is helping to further the work in Europe.

The conference itself was very intensive with almost 30 presentations taking place over 2 days. The messages that stood out for us were:
Lance Wallnau did an excellent presentation on unity – As One – being the theme of the conference. He challenged us to step into new arenas in the other mountains and see what God will do!
Dennis Peacocke again challenged us to equip people on a local level as when shaking comes, it is going to the the greatest opportunity of the church to shine.
Mark Pfeifer spoke on Transforming Cities. It is not enough to simply pray and decree, we must also apply ourselves to training people in the local church to live differently.
Dutch Sheets spoke on Understanding the Times and the Seasons. He taught into this subject and spoke on how the seasons are trying to connect amidst tremendous warfare from the enemy to change the times and seasons.
Naomi Dowdy challenged the apostles to re calibrate and re-think some things in the apostolic prophetic movement so as to be relevant.
John Muratori spoke on biblical taxonomy…understanding finances from a legal perspective… Excellent stuff!!
Joseph Matterra’s message on Apostolic Theology was filled with much needed wisdom . What and how apostles should be preaching in order to build the ekklesia.
I also personally REALLY enjoyed Dr C Peter Wagner’s message on Finishing Well. Sharing from his own life and some excerpts from the book Half Time (by Bob Buford), he challenged us to begin to plan to finish our race well. Very thought provoking.

I think that on the whole, I was challenged by where we are as leaders in the new apostolic reformation. The newness of the apostolic prophetic movement has worn off and we now need to produce answers to local, national and global challenges. There are issues and excesses that now need to be looked at and addressed in order to move forward.

Overall, we did not receive a lot of new revelation or teaching, but rather were challenged on how we are applying what God has already spoken. For me it was a sobering time – we really need to hear what God is saying to us as leaders.

On a personal level-many of our friends were there and we bring you greetings from Dr Kelly and Apostles Robert Henderson, Tim Carscadden, Tony Fitzgerald and Yemi Adefarasin.

Thank you all so much for your prayers, we appreciate your commitment to the vision of ICAL and AGIHOS.

Launch Of The Gauteng Africa-Israel Chamber Of Commerce