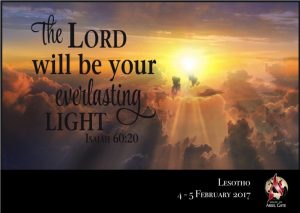 Our first visit to Lesotho – what can we say, “Aa..e ntle” (Wow..beautiful).
We were overwhelmed in Lesotho, with so much LOVE. Meeting Mr and Mrs Borotho was a real honour. After speaking with them so much before with all my questions, it was…at first…stepping into the unknown, but then we met the Fire House of Lesotho. We were strangers, but quickly became friends with hugs and smiles, welcoming us.
Ntate (Mr Borotho) has such a presence, he doesn’t really have to say anything but you know when he is in the room. Mme (Mrs Borotho), the passion she has for the Lord and the energy she has, energises a room. They are true servants of the Lord.
The anointing from the choir during the conference was like a penetratingly deep sound, harmonising in a way hard to explain because it is so beautiful. They have a deep respect for God and are passionate about their worshipping and praising of Him.
The new scriptural revelations that we’ve received, and the active illustrations from Apostle Natasha, will be etched in our minds forever. Apostle Natasha gave us amazing examples to illustrate the concepts being explained. The images of ‘brain neuron’ explosions are so colourful, we could have been witnessing a fireworks display.
Travelling through Lesotho after the conference for another day and a half was spectacular. From hearing the bells ringing on the sheep and cows as we drove through the mountains, driving through the clouds (sky) – literally, we could have been in Switzerland. Having continuous rain the Monday was breath-taking, with waterfalls everywhere, green all around, reaching heights above the clouds, as high as 2950m (the instrument in the car) – it felt as if we were driving in the sky, fitting for the name “Kingdom in the Sky” Lesotho.