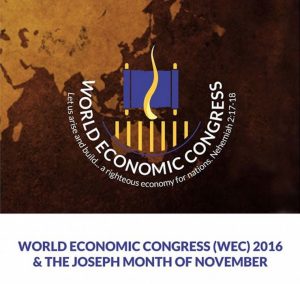 How exciting it was to welcome Apostle Natasha Grbich back to Zimbabwe for the World Economic Congress mandate briefing. It was a gathering of Apostles, Prophets and pioneer leaders, entrepreneurs and thinkers from around the globe hosted by Zimbabwean, Dr Alexander Chisango.

The theme was on how to develop a righteous economy and become a voice speaking into a righteous culture of world finance and business in the earth. A world economy not based on the Babylonian system but on God’s economic blue print. Wealth is always attached to purpose and should be coherent to what God wants to achieve with the world’s vast wealth, not based on the current Babylonian system. This is based on Nehemiah 2:17 & 18 Let us arise and build a righteous economy for the nations. This will be in the House of God and the vast potential wealth will become a blessing and an economic answer to the nations.

Dr Ray Ndhlukula, Zimbabwean Deputy Chief Secretary to the President and Cabinet, spoke on the state of the Zimbabwean economy and its 100 day reforms. He said Zimbabwe is ranked 161 out of 191 on the world bank’s doing business index- indicating its regulatory environment remains uncompetitive.

Prophetess Violet Kadzunge commanded a very powerful prophetic activation to a song, where she prophetically led the continents of Africa, the Americas, Australia, Europe and Asia under the banner of the WEC together with 5 fold ministry banners. She then called the continents to arise and she symbolically unlocked all doors in the North, South, East and West.

Apostle Natasha presented a power packed overview of biblical economics. She made reference the book, Repurposing Capital by Brent Johnson and also touched on the redemptive purpose of the slave trade. She spoke on being a good steward of God’s economy and His mysteries. She reminded us that we must not invent but rather learn to read off the books/scrolls already written for us, this WEC and the Nations. Apostle spoke on God’s Economic Thesis for trading and banking and how Jesus overturned the tables in the synagogue thus overturning the banking system. She explained how the Jewish priests were the bankers and in addition to this they should have been a Prayer House for the Nations trading every tongue, tribe and nation back onto the sea of glass. She spoke on the importance of being in a House and how the disciples got explanations of parables from being inside the House. Beware of being a lone star outside of a House. Apostle explained of how we are now in the priesthood of Melchizedek and can’t go to war without tithing as an insurance or war tax. One must divest from the old culture of worshiping Baal and Europia through repentance.

Then the Barclays bank investor for the whole of Africa, Apostle Zienzi Musamirapamwe spoke on how Christians need to be a United Body of Christ to hold this new economy. She said that if we are divided as a church and we have no unity then we can’t hold an economy. She stated that the nations and body of Christ need to unite to enable us to be a strong foundation to launch a Kingdom Economy.

A third Apostle, Linda Gabodo, spoke on how Africa was a much loved continent with a vast abundance of natural wealth and that we need to pray for the Mordecais to arise at this time.

Bengt Arnesson spoke on a banking system he has been developing for the last 15 years. This Divine Economic Empowerment Council is a free banking system for Christians in Private/Corporate and Merchant capacities. It is an online economic platform based solely on gold and is not affected by the fluctuations and restrictions of the Federal Reserve. Its aim is to keep God’s unlimited storehouse of wealth in the Church so that the windows of heaven will be opened allowing the Ecclesia to rise and fulfil its mandate. This whole system is live and was launched here in Zimbabwe during this Congress. We were honoured and excited as this is God’s answer to our bond notes.

We then had ARDA and Brian Oldreive speaking on how they want to use this platform of Kingdom Banking to start up agriculture in Zimbabwe – a prototype that could be taken to the nations.

We wait with an expectant heart. We believe that all the speakers were singing the same tune -that is to build a Kingdom Economy where the Storehouse is in the church and widows and orphans can go to the storehouse of God as God intended. We believe that by aligning with God’s blue print, God will open the windows of heaven as in Malachi 3:10:

“Bring all the tithes into the storehouse,
That there may be food in My house,
And try Me now in this,”
Says the Lord of hosts,
“If I will not open for you the windows of heaven
And pour out for you such blessing
That there will not be room enough to receive it.”