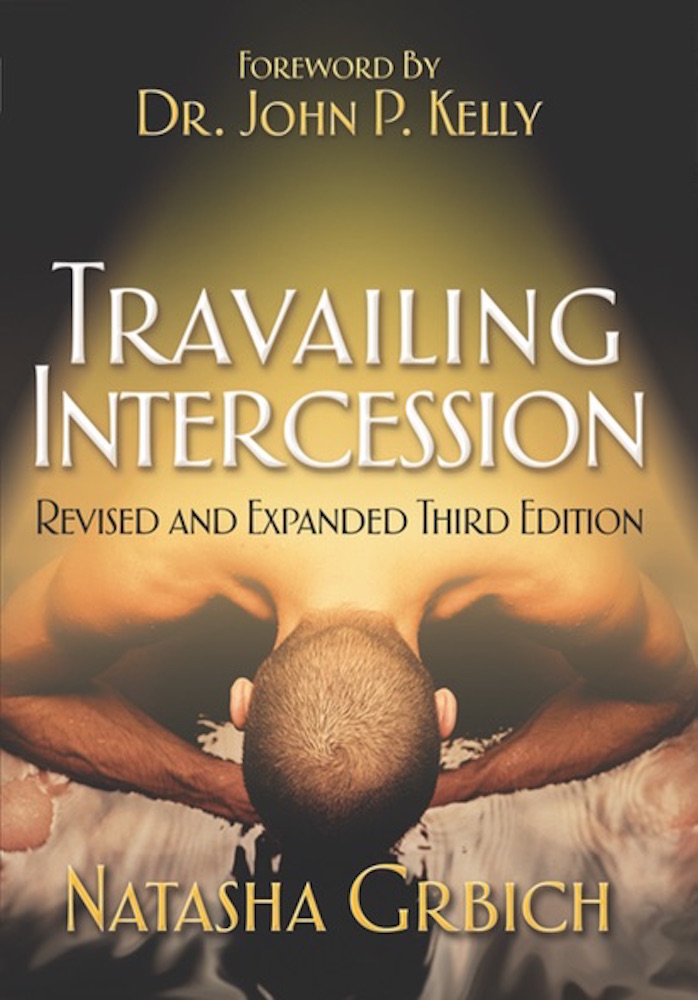 In Travailing Intercession, Natasha Grbich gives us a key weapon of warfare for the Church – for such a time as this.

Without a doubt, we are living in dangerous times from evil men and nature as Jesus described in Mark 13:8, “For nation will rise against nation, and kingdom against kingdom. And there will be earthquakes in various places, and there will be famines and troubles.

These are the beginnings of sorrows.” Romans 1:22-32 goes on to describe the human wickedness that we clearly see thrust upon our society today; overturning laws, morality and common decency.

Men will be lovers of themselves and haters of God and all God’s children. So, how shall we respond?

I firmly believe we are to act in the authority Christ gives us as born again believers – to fight the good fight of faith – through prayer and the power of the Word.
“For though we walk in the flesh, we do not war after the flesh: For the weapons of our warfare are not carnal, but mighty through God to the pulling down of strong holds; Casting down imaginations, and every high thing that exalts itself against the knowledge of God, and bringing into captivity every thought to the obedience of Christ; And having in a readiness to revenge all disobedience, when your obedience is fulfilled” (2 Corinthians 10:3-6).

Revelation 12 describes the war in heaven that became the war on earth when the great dragon – Satan- was thrown down to the earth by Michael and the angels. On earth, the dragon pursued the woman who had given birth and tried to drown her, unsuccessfully. Then he declared war on all her children – “all who keep God’s commandments and confess that they belong to Jesus” (Rev. 12:17).

Since the beginning of man’s history when Adam and Eve are confronted by a serpent (a manifestation of that dragon Satan who deceives the whole world) mankind has been in a never-ending war with its adversary in one form or another. From Genesis to Revelation we see the work of Satan trying to destroy the seed of man – to stop the purposes of God on earth.  Since our enemy is not of this world – he cannot be defeated with natural weapons. Only supernatural weapons of warfare will destroy his works. Now, more than ever we need the power of travailing intercessory prayer warriors!

The kind of prayer we need today is not gentle, childlike, soft prayers – it is warfare intercession by mature believers who understand what is at stake and how to stay and fight until the victory is won.  Knowing how to combat the entrenched lies and strategies of the enemy takes greater knowledge and equipping to survive the tactics of the enemy. This is the value of Grbich’s book. It illustrates how to war a warfare to birth the purpose of Heaven using the very practical example of how a woman goes through the process of giving birth. From conception to delivery, she teaches how to fight for His will to be done on earth as it is in Heaven. Any mother (and many fathers) will easily relate to the spiritual principles Grbich explains from the viewpoint of the natural. It is not pretty, but as every mother will tell you, it is worth it!

Travailing Intercession is a much needed book by all who desire to be, and claim to be, the spirit-led sons and daughters of God. It is not theoretical, but a practical guide born out of experience, revelation, study and scripture that is full of insight for today’s church to wake up and understand what it needs to do to arise and fulfill the purpose of God.

Now is the time for all churches, all believers, all ministers, business people, military and civic leaders to find and secure intercessors who are true, called, anointed and appointed spiritual warriors. Those who will pray so that the church can fulfill its commission to not only win the lost and disciple nations, but overcome the many strategies of the enemy and birth all of God’s purposes of Heaven.

Travailing Intercession is a warfare manual for such a time as this!

So Beautiful by Leonard Sweet

Drawing Near By John Bevere

The Spirit of Python – Jentezen Franklin