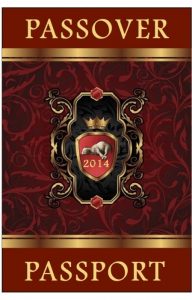 From The Desk of Apostle Natasha:

The Door of Passport the 14 April 2014 heralds a new season. Every season demands a different alignment and preparation because “we have never been this way before”. (Jos 3:4)

Become a Hebrew together with the House of Ariel Gate and cross over.
(Gen 14:13)

We look forward to entering this next dispensation (economy) together. That is why we prepare together on Saturday and Sunday to eat our Passover on Monday as a body.

Many reports, dreams and visions are beginning to flow about the “new thing”
(Isa 43:19) that God is about to do.

We felt this was one of the most significant feasts to celebrate this year as it is a marker to the future destiny of our nation and God’s people.

The name of the Fourteenth Letter is both a verb and a noun. As a verb, it means to continue, flourish, increase, sprout or propagate. It appears this way only once in Scripture, in the great prophecy declaring the eternal endurance of the name of the Lord Jesus Christ:

“His name shall endure forever: His name shall continue as long as the sun: and men shall be blessed in Him: all nations shall call Him blessed.” (Psa 72:17)

The integration between the Passover and its date (the Number 14) is extensive. It begins in Genesis 14, which contains the first occurrence of the Number 14 in all the Bible. The integration continues with the debut of both the word “Hebrew” and “Melchizadek,” the Priest of the Most High God who brought forth Bread and Wine (the Eucharist) which is the Christian revelation of the true meaning of the Passover!