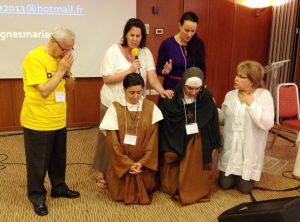 At the beginning of October we were in Cyprus for the MIDDLE EAST PRAYER ASSEMBLY. This was a really intense time and I want to thank all of you for your prayer for us during this time.

There were representatives there from all different denominations and expressions of Christianity. From orthodox archbishops and nuns to charismatic intercessors and denominational pastors. Each region was given a time slot to present what is happening in their nation and then we had short times of prayer for those regions. We heard from: Lebanon, Jordan, Syria, Iraq, Egypt, UAE, Israel, Palestine and Turkey. It was quite an eye opener to hear from Christians in these regions. The Western church is largely unaware of the intense persecution that the Christians in these nations are experiencing. Many shared of the good things happening for the church in their nations amidst this intense persecution and violence. I was touched to see how many acknowledged that they were aware that they may have to die for their faith but that they were ready for this. An often heard phrase was, ” If this is the price that we have to pay for our Christianity, we are happy to pay it”. I was greatly challenged that we do not fully appreciate the privilege we have to live in a nation that is at peace.

Throughout the Assembly there was an emphasis on the Next Generation. A call to equip them and hand over the baton to them. We had some young people part of the Assembly and how exciting to see them pray for their nations and hear their testimonies. We spent some time in prayer praying for them and also for the many youth initiatives happening all over the Middle East.

Syria was also high on the agenda – we heard from several people about the situation inside the nation and were challenged to seek the Lord and not just believe all that we hear on the news media about the war. The Ariel Gate team has the privilege of praying for 2 nuns who are stationed in a monastery about 80km from Damascus. The whole Assembly also took time to repent and pray for the church in Syria as well as for the God to intervene in the crisis.

I came away from the Summit with an overwhelming knowing that there is a sound from the eastern church that needs to be released. They have keys for the global church which it needs right now. It is time to embrace our brothers and sisters – even if all their theology does not add up to ours – they love the Lord and are part of the family of God. Time and again I was moved by the unity that was evident when we worshipped and prayed together. That is not to say that there were not times when there were disagreements and opposing viewpoints presented – but all was dealt with in a mature and loving manner.

The Middle East is very important in global affairs – we cannot afford to have a skewed understanding of the situation if we are to pray Kingdom prayers for this region. Our brothers and sisters in the Middle East are standing and it is time for us to stand with them – as one – for God’s purposes in this region.

USA – Noon Prayer – Prevailing Prayer and the Fear of The Lord