Apostle Timothy’s visit was yet again a time of refreshing – reminding us of what God is doing in this region (KZN) to ensure that the government of God arrives in this City and then also into the Nation.

Placing Durban back on track through the prophetic word.The people of Durban have been running or going after the wrong things, this visit brought the city back to its original prophetic call and destiny in God.

He also released the call for individual persons purpose for the city of Durban and the Nations – PSALM 139 – GOD has pre-destined and pre-ordained all of our paths.
The Lord also sent an Angel with a Key, which Apostle Timothy released over the people – the key of David which was a sign that God was at work, to reopen old doors that have been shut in the region, and in the lives of people. We had a very fruitful time in Durban and are waiting to see what’s next for the city. 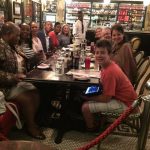